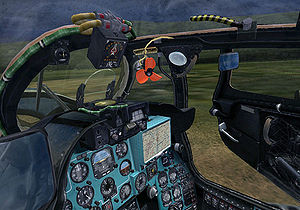 The player pilots an attack helicopter inside a dynamic campaign. Instead being confined to separate pre-defined "missions" like in so many other simulation games, it is possible see the battle unfold across the entire battlefield in real time, without "load times" during missions. Your tasks in the game range from attack missions on enemy bases, FARPs and vehicles to close air support, interdiction of enemy air defenses, recon-missions to obtain photographic intelligence data about enemy installations and troop deployments, air support, down to simple transfer missions to replenish your forces.

Effective air defense simulations necessitate NOE (Nap of the Earth) flying and the use of terrain cover, as well as making best use of the stealth characteristics of the Comanche helicopter. A "Mission Commander" feature allows players to define their own missions and ultimately control the battle strategy from a powerful interactive game map that integrates seamlessly with the 3D action. The entire battlefield simulation is fully networked and supports multiple human pilots on either side of the simulated conflict.

Four helicopters are 3D modeled. These are the AH-64D Apache Longbow and RAH-66 "Comanche" of the United States and the Ka-52 "Alligator" of Russia (NATO codename "Hokum B"), but also Mi-28N "Havoc B" (Russia) is a 2D modeled gunships. EECH community update v1.11 adds the Mi24V as the fourth helicopter with a full 3d-modeled cockpit. All helicopters are playable. 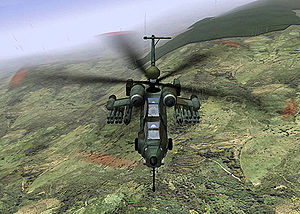 The game tends to be as realistic as possible, like the realistic engine startup procedure and the priority fire zones for example, while retaining the ease-of-use factor that made it popular with players who are more interested in action than avionics. Support for innovative input devices like TrackIR allow for an optimal level of immersion. Combined with the truly massive environments that retain a realistic sense of scale, Enemy Engaged is as close to a non-classified full-scale realtime battlefield simulator as it gets.

Although the original game was released in 1999, the community has developed substantial graphics and gameplay-related enhancements, aside from stability and multiplayer improvements. The release of the game's source code ensured that an active fan community grew in size and turning EECH into it's current game.