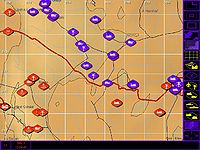 This table should give you more understanding of realtime military force icons in the campaign screen.

Although bases itself cannot return fire. They are heavily defended by other military forces. Like anti aircraft artillery and fighters on patrol.

Try to practice recognizing vehicles and there respective icons.