From EECH Central
(Redirected from HOTAS)
Jump to: navigation, search 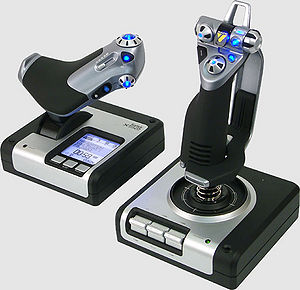 The Saitek's X-52 HOTAS
This page is for those how are trying to set up their HOTAS as realistic as possible. Though the tendency of the this page is meant to be a neutral, subjective elements can't be avoided. 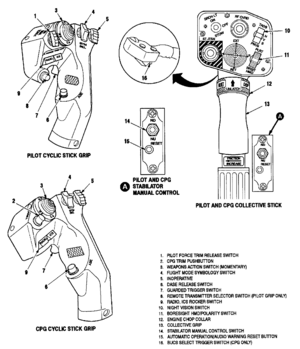 A survey of AH-64A flightstick's controls 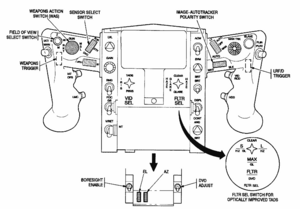 A survey of AH-64A gunner's controls

The the pictures on the right is telling that the gunner has their controls on an instrumental panel. While the pilot is using is his flightsticks for all his input.

As can see on the flightstick, most buttons are assigned for navigation and piloting purposes. The buttons on the instrumental panel is all about target acquisition and designation.

Here's a complete list of available controls. While the HOTAS is the simulation counterpart of the flightstick, the keyboard stays with the job to substitute the instrumental panel.

1 It's somewhat anti-climax to launch not with the trigger. Frankly, most missiles are launched with a button press, not with a trigger action. Though rockets should be handled by the pilot.
2 This is crucial for the player's survivability and should be accessible via the HOTAS. In demanding situations he has to pilot the helicopter and deploy countermeasures. While this is latter is done by the gunner in real life.

Communications is done by a headset withvoice recognition. Research needed.

Head movement is done by TrackIR. Without a TrackIR, buttons leftover can be assigned for this purpose.

Outside view cameras shouldn't be accessed when pursuing realism.

In the game the flight dynamics are more user friendly than in real life. See it as a gift in helping the user to joggle between pilot and gunner's job.

All these anomalies making it impossible to setup the HOTAS as the real life counterpart. Never the less is here a short guide to make it as realistic as possible.