Campaigns and skirmishes progression can be saved any time. 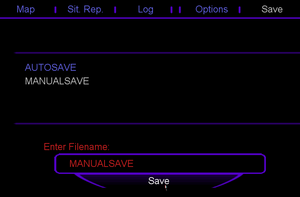 Within the campaign menu, select the save tab (last tab) and fill in a name.

Fastsave is often known as quicksave. Saving the progress with a single keystroke.

The savegame would be called FASTSAVE.

Autosave will automaticale save progress after a defined timespan (e.g. 5 minutes).

This will save the progression every 5 minutes.

You can make game leave backup of replaced save file. Old save file will be placed in same folder with suffix "_bak" in the name.

You always will have one current save file and two previous. 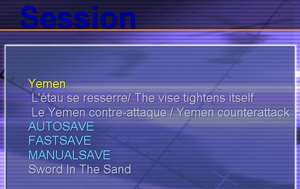 A savegame can be picked when a map is selected. The names of the savegames show up in bright blue. Choose the right savegame and press OK to load the selected savegame.

Every single savegame generates 2 files, a SAV and a SCH file. These files will be located in the right campaign directory of every map.

For example, the save files of AUTOSAVE in the picture are located here:

Note that the name "MANUALSAVE" is created by user input.

The SCH file can be opened with a regular text editor.

Savegames are lost when the game has been updated. Finish the campaign before updating or accept loss of campaign progress.